Two suspects to be Identified 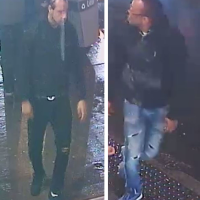 
On Tuesday, January 1, 2019 at 12:30 a.m., the Toronto Police Service received a call for an assault in the Queen Street West and Bathurst Street area.

It is reported that:

- the 36-year-old man was punched by a one man and fell to the ground unconscious, where he was then punched again by a second man

Suspect #1 is described as 25-35 years of age, 6'0", slim build, with corn rows and a beard. He was wearing a black hooded sweatshirt, black pants and black running shoes.

Toronto Crime Stoppers is offering you a new way to securely provide tips through SecureDrop.
(THIS IS FOR CYBER RELATED CRIME ONLY. Please use our SUBMIT TIP P3 interface for regular tips.)
On a malware-free device, you will need to download and install the Tor browser. From there, you will access the hidden SecureDrop page. Once the connection is successfully made, you will be prompted to paste a link into the browser and input your tip information. You will be given a secure codename to continue private communication with Toronto Crime Stoppers. For more information, and to proceed with a tip submission through SecureDrop, click HERE. We take your privacy and anonymity very seriously.